By clicking “Accept”, you agree to the storing of cookies on your device to enhance site navigation, analyse site usage, and assist in our marketing efforts. View our Cookie Policy for more information.
Open peferencesDeny allAccept all

A Russian television station wanted to launch a new website to stream live and on-demand videos of their programmes. Their goal was ambitious for the time and the imposed deadline seemed impossible from the start. This was the beginning of a three month journey of minimal sleep and web experiments.

The client understood their audience were all buying iPads and they wanted to cater for this audience by having a service that worked perfectly on it. This wasn't a simple task. There weren't many video streaming services that provided native players with the controls we needed. 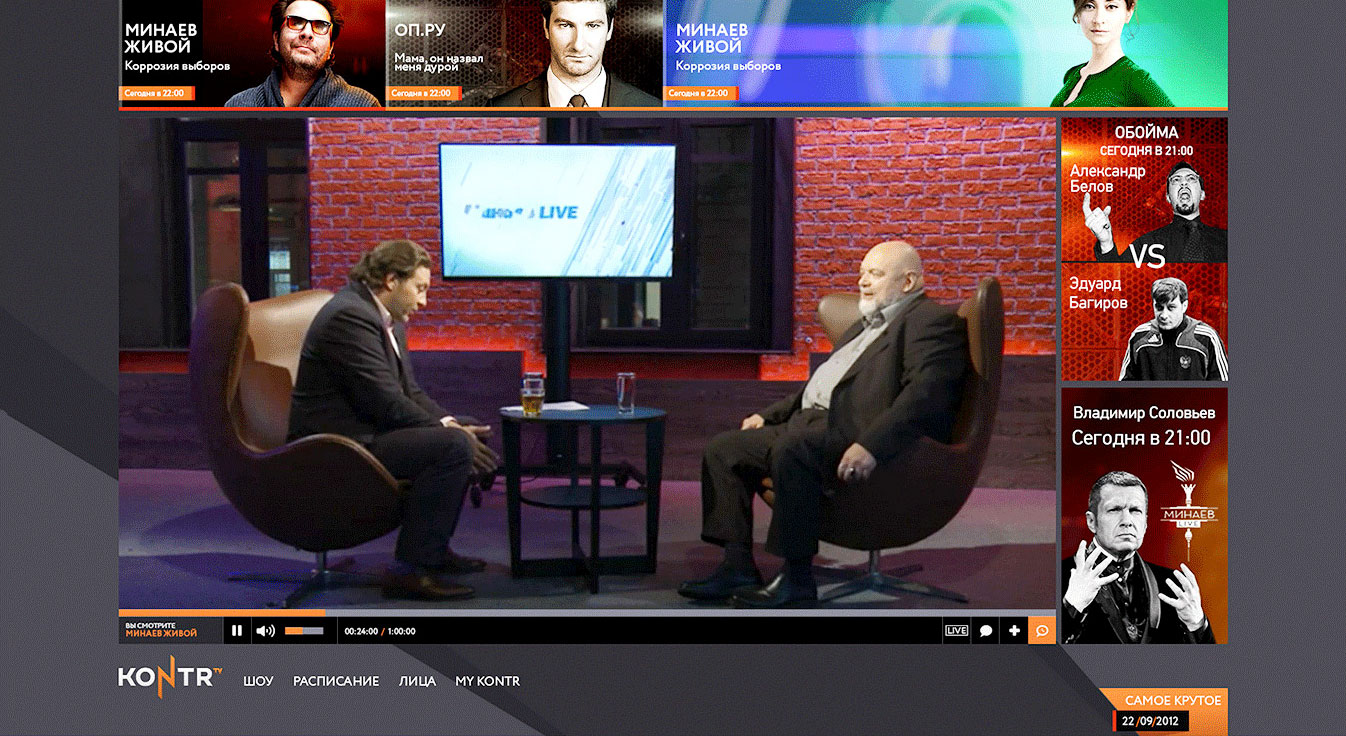 Don't let them miss a beat

The nature of the programmes was often controversial. The owner wanted his audience to be continuously watching the video and not miss any of the content. The video needed to be always available, without disruption. This caused a problem because viewers would also want to look at the programming schedule, information about the current hosts, and topics being discussed.

The player was built to take up the entire screen, except for some space for the required advert placements. All content was loaded as an overlay on top of the video, fading away when the user stopped interacting with it. Giving the viewer the opportunity to navigate through the content without having to miss the live video stream. 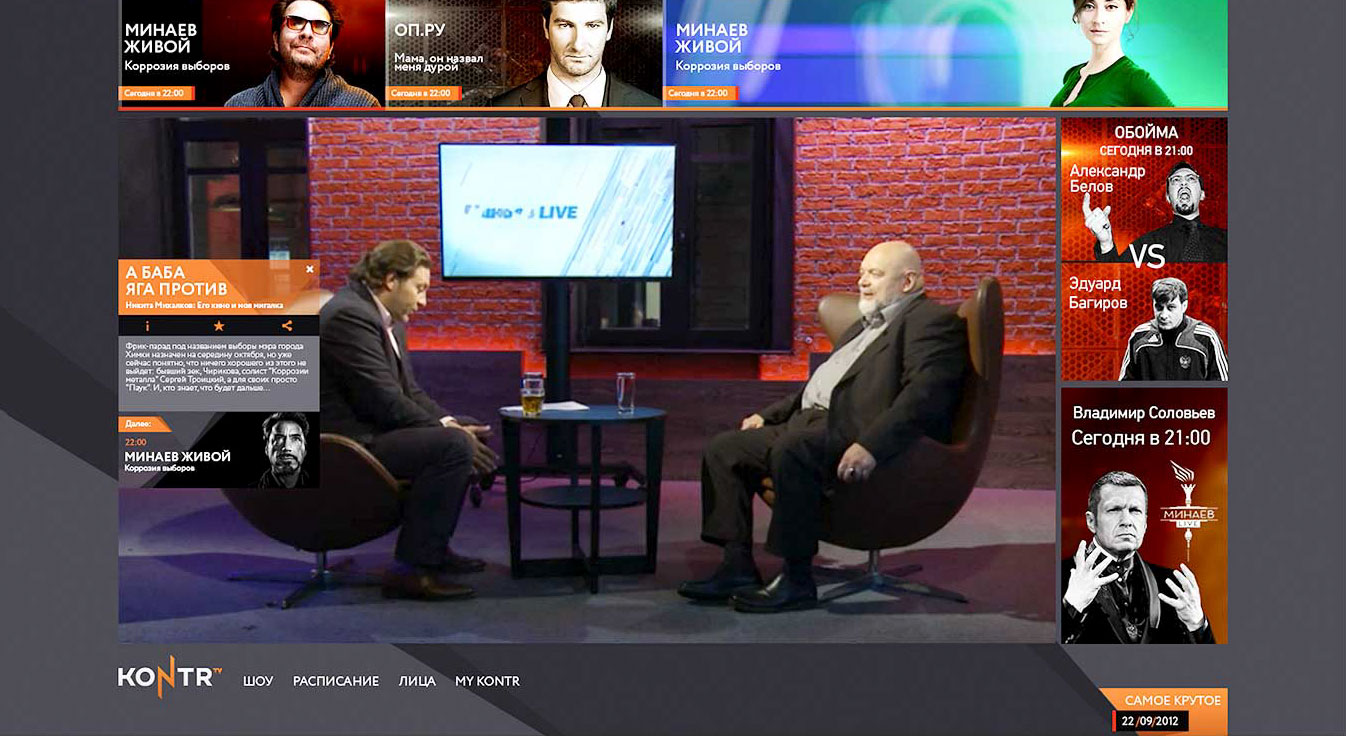 With so many active viewers, the comments section was likely to be flooded with polite discussions and venomous arguments. Building a standard, linear, comment system was not an option, there would be too many conversations overlapping each other.

We decided to have comments placed at the timestamp of the video when the viewer commented, which we called "Momments". This grouped conversations around certain topics being discussed in the programmes and created some order. The comments could also be viewed as a linear feed should the user wish. 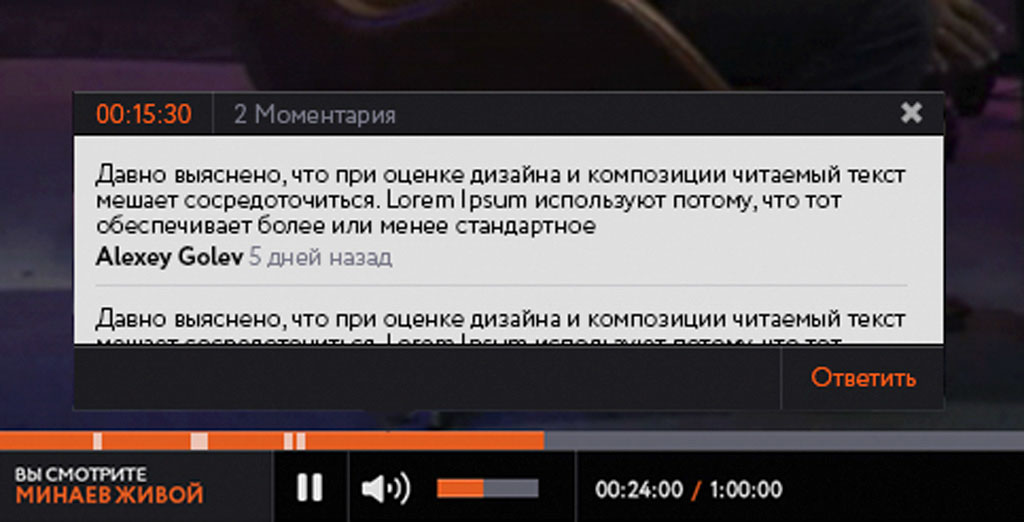 “Momments”: Comments in the player’s timestamp

Rest is important, no matter the deadline

We were two months into a three month deadline. The average number of hours of sleep per day was down to about four hours. Alexey decided that we needed a break from the project, something to reenergise us.

He paid too much for two Radiohead tickets for that evening and off we went. Sluggishly making our way through the crowd and into our seats we waited for the band to come on stage. Only one song into the setlist Paul fell asleep, luckily only missing two songs.

The next day we got back to work refreshed and ready to finish this project with some more sanity.